Imagine if the secret of your beauty lay in a tiny arboreal fungus! The magical mushroom I am referring to is the silver fungus, known by many other names including snow fungus, snow mushroom, tremella fuciformis, silver ear fungus or white frozen mushroom. Although this superfood is little known in the West, the Chinese have been cooking with silver fungus for thousands of years.

As for the legend, it revolves around one of the 'Four Beauties' of Chinese history, Yang Guifei, who incorporated snow fungus into her beauty routine. The Tang Dynasty concubine was admired for her radiant skin and youthful complexion. 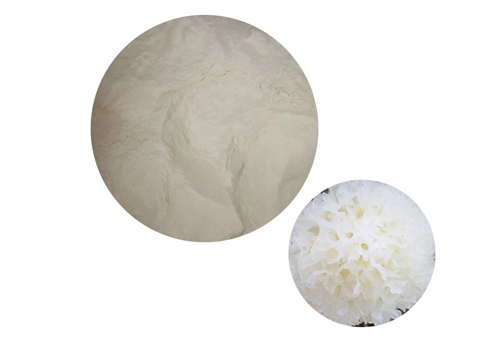 Snow fungus looks delicate and ethereal, and it is rich in plant collagen which can hold up to 500 times its own weight in water, which helps our skin retain moisture and maintain a youthful appearance. It is also known as silver fungus in Asian countries and it can be found in many Chinese restaurants as a dessert, it has excellent moisturising properties and also helps to brighten the skin. In recent years, consumers have really recognised mushrooms as adaptogens that can help reduce stress. As a result, the mushroom family is receiving renewed attention.

Nowadays you can even get silver ear masks, creams and anti-wrinkle injections. It is also acclaimed for its anti-inflammatory properties and its ability to soothe dry coughs. Tremella fuciformis extract is the most important active ingredient of silver fungus.

How does snow fungus taste? Like black fungus, it is quite mild and when rehydrated and then simmered or boiled, it has a crunchy gel-like texture that absorbs and stays in the liquid.

In addition to hydration, snow mushrooms also have anti-ageing effects on the skin. Extracts have been shown in studies to prevent skin ageing pathways and protect against free radical damage, making it a potential tool in our daily skin care regimen to reduce wrinkles, fine lines and even skin tone.

If you're not just looking to hydrate, then snow mushrooms are a great option. Hyaluronic acid alone can add moisture to the skin, but snow mushroom extract can also add natural hyaluronic acid, as well as other fibres needed for healthy skin, such as collagen and elastin.

Dry snow fungus needs rehydration. Cover with plenty of room temperature water for at least an hour. Once rehydrated it will feel soft, spongy and will double to triple in size. The hard bottom of the snow fungus needs to be trimmed with scissors, but do not discard it. It can be used as a natural facial scrub.

Traditional herbalists recommend that snow fungus should always be prepared with Chinese southern and northern almonds, as they complement each other to nourish the respiratory system and lungs. Find out more about Southern and Northern almonds - not to be confused with the almonds we are familiar with!

Please note that the research on snow mushroom extract was done through oral intake, so more research is needed on its topical use.

YouBio has focused on the extraction, separation, and refinement of natural products for over two decades. We set “Care for Life" as our goal and devoted ourselves to the cause of human health. By now we have developed and produced more than 100kinds of plant extracts as well as natural ingredients. The above information is provided by the tremella fuciformis extract manufacturer.

Previous: Spring Is a Season of Hope

Next: What Is Bilberry Extract Good For?