Exposure of human skin to UV radiation is a major factor for skin pathologies including erythema, inflammation, degenerative age-related changes and cancer1. UV radiation is mostly composed of UVA (315–400 nm) and UVB (290–320 nm). Overexposure of the skin to UVA and to a lesser extent to UVB leads to oxidative stress that increases the generation of reactive oxygen species (ROS) causing lipid peroxidation of cell membranes, DNA and protein damage to tissue, inflammation and keratinocyte apoptosis. ROS also triggers the expression of matrix metalloproteinases (MMP), that degrade extracellular matrices such as collagen maintaining cell and skin integrity.

Pomegranate fruits have been used for centuries in ancient cultures for their medicinal purposes. The health benefit of pomegranate has been attributed to the content of hydrolysable tannins (ellagitannins) including punicalagin and pomegranate ellagic acid (EA) as well as anthocyanins and other polyphenols found in pomegranate extract and juice. Although POM ellagitannins are highly bioactive in vitro, they are not absorbed intact in the small intestine and undergo partial hydrolysis to form EA. Ellagitannins and EA remaining in the large intestine are further metabolized to urolithins A –D by the microbiota in the large intestine and are absorbed into the bloodstream. Therefore, pomegranate properties could be mediated by the metabolites produced in the intestine in addition to the original phenolic compounds present in the food matrix. 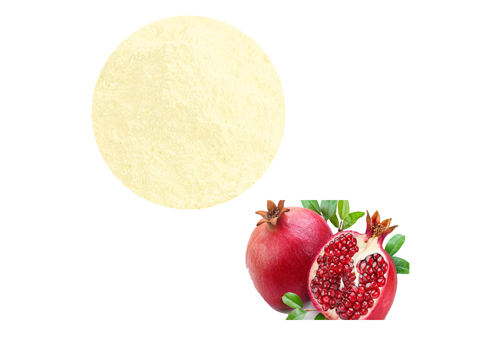 Findings demonstrated that pomegranate extract inhibited in vitro growth of bacteria involved in the pathogenesis of acne including Propionibacterium acnes, Propionibacterium granulosum, Staphylococcus aureus and Staphylococcus epidermidis. Although the concentration of circulating Pom ellagitannin metabolites is very low, there is a possibility that Pom ellagitannin metabolites in the skin might alter the composition of the skin microbiota8. In addition, pigment forming bacteria can contribute to skin UV protection. Therefore, it was our hypothesis that pomegranate consumption might alter the skin microbiota contributing to protection from UVB.

Several in vitro and animal studies provide evidence that either topical application or oral consumption of pomegranate juice (PomJ) or extract (PomX) or EA reduce damage from UVB irradiation. One human study demonstrated that oral consumption of an EA rich pomegranate extract in healthy women was associated with a protective effect on slight sunburn caused by UV irradiation even at a low dose resulting in a decrease in pigmentation. In vitro antioxidant and anti-inflammatory activity of ellagitannins and EA have been widely demonstrated, while oral ingestion of pomegranate in humans has been less investigated. Some human studies provide mechanistic evidence that pomegranate ingestion leads to an increase in antioxidant and anti-inflammatory activity.